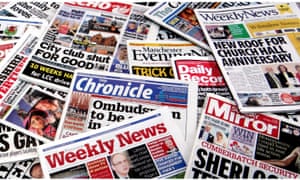 As Trinity Mirror closes another free title while bemoaning a lack of audience, a US newspaper owner tells it like it is: journalism is of secondary importance

Curran (1986) argues that the advertising industry has a major influence on the structure and output of the British print media.  It is argued that media producers focus on providing the media for the sectors of the population that the advertising industry wants to address.  For many publications, advertising is the main source of revenue and therefore the advertisers could wield significant power in print publications and may affect the content; the use of sponsored promotions in magazines like Empire may seem harmless, but what if a newspaper was reluctant to print a story because it might upset one of their major advertisers?

Source: A print publishing reality: advertisers, not readers, are the customers | Media | The Guardian

An important part of learning about institutions is that they tend to align with political parties. This can be for a number of reasons, but is mostly to please the dominant ideologies of their audience.

This is clear to see in this first image:

It is clear by looking at this that The Guardian is predominately read by a labour supporting audience (centre-left), whilst The Telegraph, in contrast, leans very much to the centre-right, supporting the Conservatives (Or Tories). Other observations; over a quarter of Daily Express readers support UKIP (quite obvious if you just look at the front page), along with The Star and there is not a single newspaper that has anything near a 50/50 labour/conservative split.

The history of such allegiances can be seen in the diagram below, with support shown in every general election from World War 2 until 2005, note how support from institutions – like audiences – tends to change to reflect the zeitgeist and ideologies of the era:

Only The Mirror and The Telegraph‘s support has remained consistent since the end of World War 2.

What other observations can be made, based on these two diagrams? Answers in the comments please.

Year 13 this week applied Marxist theory and Hegemony to audiences, allowing us to revisit some audience theories (Both credited to Katz & Lazarsfeld, 1955); namely…

Here audiences are ‘injected’ with representations, values & ideologies directly from institutions – such methods are used in propaganda materials, for example. END_OF_DOCUMENT_TOKEN_TO_BE_REPLACED

Media literacy policy seems to have become one of the living dead. It is still contained in statute, but no longer displays any discernible signs of life.

During the noughties, media literacy was one of the flavours of the decade in policy circles. The 2003 Communications Act bestowed on Ofcom – the new converged media regulator – a responsibility for ‘promoting’ media literacy. A similar requirement was contained in the 2006 BBC Charter. High-profile representatives of the media industries were falling over themselves to join the conversation, and many educators were keen to get on board. Yet in 2016, media literacy is barely more than a whisper. So what happened?

Last week saw the publication of the second of two articles co-authored by Richard Wallis of Bournemouth University and myself tracing the rise and fall of media literacy policy in the UK. You can find the latest one here